After researching dozens of blenders, talking with five experts, and testing 20 models over the course of four years, we’re confident that the Oster Versa Performance Blender with Low Profile Jar offers the best value for most people. At roughly $200, it performs as well as blenders that cost twice as much, and it blows cheaper blenders out of the water. It has one of the most user-friendly and versatile control panels we’ve seen,with both variable speed and presets for things like soup and smoothies .
At 17½ inches tall, it’ll also fit better under a counter than most other high-performance models. Compared with equally priced blenders, the Oster Versa’s speeds are more nuanced, its 1,400-watt motor runs more quietly, and it’s one of the only models that comes with a tamper for bursting air pockets in thick mixtures.We don’t think the Versa is the absolute best model out there, but its serious blending skills, solid seven-year warranty, and ease of use make this a great choice if you don’t want to plunk down half a grand. 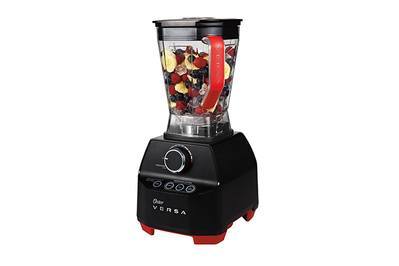 When we first reviewed blenders, in 2012, we didn’t find one for less than $450 that really impressed us. When Fred Waring introduced the Waring Blender in 1937, it retailed for $29.75—or roughly $485 in today’s dollars. That price may seem obscene, but quality blenders have historically been expensive. Since we first published this guide (this is our third full update), we’ve found that companies, gunning to compete with the likes of Vitamix and Blendtec, have introduced relatively modest-priced blenders with really big motors that are surprisingly efficient at liquefying food. We think the Oster Versa is the best of this new breed of high-powered but budget-friendly options. After almost two years of long-term testing, we’d say it’s about 85 percent as good as our former pick, the Vitamix 5200, but at roughly 40 percent the price.
If the Oster Versa sells out, we’d go for Cleanblend’s 3-horsepower, 1,800-watt blender, which makes creamier smoothies and piña coladas than our main pick. But we find its jar really flimsy and the overall design clunkier compared with that of the Versa. The controls are also more confusing to use, and there are no presets. Its powerful 3-horsepower motor helps decimate berry seeds and ice, but there isn’t much variance between low and high speeds.
For the fourth year running, a Vitamix blender performed best, overall, in our testing. The classic 5200 was our top pick in 2014 (the Pro 300 the year before), and once again it was the only one in our tests that could make creamy peanut butter and puree soup without spewing molten liquid up the sides of the jar, and it has the best range of speeds (far better than the equally priced Blendtec Designer).

It doesn’t have any preset speeds, which, after long-term testing, we found we wished it had. And there have also been user complaints about black flecks—pieces of PTFE, a chemical found in nonstick coatings—breaking off the gasket around the base of the blade. Though we haven’t experienced this problem in our own usage, we also weren’t totally satisfied with Vitamix’s response to the issue. For the price, the 5200 is only worth it if you plan to blend a couple of times or more per week. Otherwise, we think the Oster Versa will satisfy most people’s needs for less than half the price.
Not everyone wants to spend $200, let alone $450, on a blender. If you rarely use a blender, but want one for the occasional sauce or smoothie, the $100 KitchenAid 5-Speed Blender is the best less-expensive model we have found. It produces much thicker, more rustic textures than any of our other picks, and its motor isn’t nearly as powerful (and more likely to burn out if overtaxed). But it’s a good, all-purpose machine that’s small enough to fit on the counter under most kitchen cabinets.
Why you should trust us

For a scientific perspective on the pervasive black-fleck issue reported with the Vitamix and other high-performance blenders, we spoke with Neal Langerman, chief scientist and owner of Advanced Chemical Safety, a consulting firm. We also reached out to Jonathan Cochran, a former blender salesman who now runs the site Blender Dude, for his take on the best Vitamix and Blendtec models to test. For our original guide, authored by The Sweethome’s Seamus Bellamy, we consulted with Lisa McManus, an executive editor in charge of equipment testing at Cook’s Illustrated and Cook’s Country.

Christine Cyr Clisset has written specifically about kitchen gadgets that whirl, cut, and chop for The Sweethome for more than three years. That includes guides to food processors and immersion blenders, and prior reviews of blenders. Lesley Stockton has tested blenders for The Sweethome for three years running, and also covers pressure cookers, cookware, and knives for the site.
Who should get this

If your current blender makes really thick or rough-textured purees and smoothies, and you want a more velvety consistency, we’d upgrade to a high-performance blender, which our guide’s pick, runner-up, and upgrade all are.

If your blender has only a variable speed dial, and you wish you could turn the blender on and check your email while your smoothie finishes up, then you might want a model with preset speeds.

If you’re really concerned about chemicals leaching from a plastic blender jar, you may want to go with a blender with a glass or metal jar.
How we picked and tested

In each blender, we made a green smoothie packed with frozen bananas and berries, kale, and coconut water. We made mayonnaise to test how each did with emulsification, and mixed raw peanuts into peanut butter to see how well they processed gooey purees. With our finalists, we made rounds of piña coladas to see how well they blended ice into slush.

In 2015, we also processed water for two minutes in each blender to see if any of the jars produced the dreaded black flecks that have fired up the blend-o-sphere the past few years. Additionally, we noted how easy or difficult each machine was to clean, how noisy they were, if any of them produced a burning smell while running the motors, if the jars were difficult to attach to the bases, and how easy the interfaces were to use.
Our pick